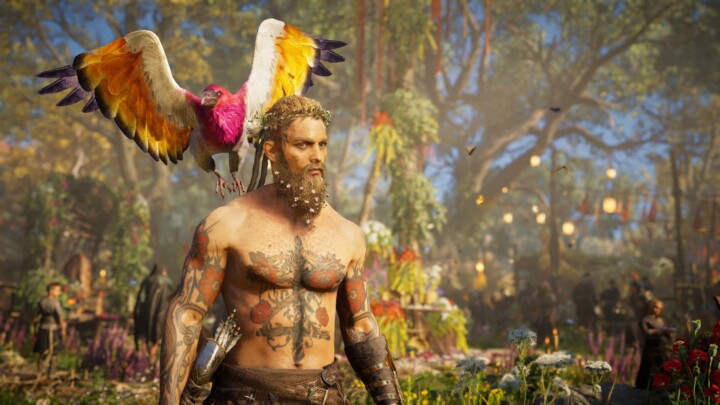 Anyone who has been back to Ravensthorpe recently will have seen that the next seasonal festival in Assassin’s Creed Valhalla has begun. As with the Yule Season before, the Spring Equinox is marked by a festival during the Ostara Season.

In the past, the Vikings celebrated both of these holidays, and in some ways, they played a big part in making Christian holidays like Christmas and Easter what they are today. In the game, the Ostara Festival gives players a chance to take a break from taking over England and have a little fun while earning limited-time rewards.

This event is happening right now and will be over on April 8th. Assassin’s Creed Valhalla, active players in December 2020, will probably be familiar with what’s on with the Ostara Festival because it’s very similar to the Yule Festival. Players can take part in activities and competitions to earn tokens that they can use to get event prizes.

There are also several side quests that players can do to earn more tokens. This makes getting all the rewards easy without spending too much time. Still, there are some big differences between the Ostara Festival and the Yule Festival, and young comers may want to know how everything works.

Because it takes a lot of time and the reward isn’t that great, most players shouldn’t do it more than once unless they are 10 tokens away from an object they want to buy. Braun is standing next to a keg in the main festival area. When Eivor reloads, he won’t be drunk anymore because of this challenge.

The Twirling Key target challenge is also back from the Yule Festival, but the rules have changed slightly. Players must use the Light Bow to hit as many targets as possible before the time runs out. The more it pays off, the smaller the goal.

First, players should try to hit the small red targets, then the medium yellow ones, and finally, the big green ones. Lastly, players get extra points if they hit all the targets in a set before they turn back over. If a player gets enough points, they will get a cool 40 Yule Tokens.

The Ostara Brawl is the last challenge players can repeatedly do to get Ostara Tokens. This challenge has players fight ten enemies one after the other, with little time to heal.

Of course, players can’t use weapons, so they can only use their fists. When players win a round, they can either take their money and leave or keep going and risk losing everything. If you win all 10 rounds, you will get 140 Ostara Tokens.

Assassin’s Creed Valhalla: The May Queen Side Quest

The May Queen is one of four event-related side quests that players can start by talking to Mayda. It’s not hard to finish the quest, but you must travel and fight a mini-boss. No more will be said about it so that the surprise at the end of the mission stays the same, but players should know that if they complete this mission, they will get 140 Ostara Tokens. This can’t happen again.

Spiritual Defense is the next side quest that players will want to do. This one is a bit more complicated, and to start it, players have to find Alvis. The whole quest has to be done at night, so players should use meditate if they need to speed up time.

The first process of this quest is to start fires all over the town. When the player goes back to Ake, spirit animals will attack them. These are pretty hard, so players should be careful and ensure they have enough food before they start. This side quest gives you 140 Ostara Tokens, just like the May Queen side quest.

As part of the Ostara Festival, a quest about decorating the settlement has been added. Players could buy Yule decorations during the Yule Festival, but there was no reason to use them. This has changed. Players must talk to Norvid at the festival shop to start this quest.

After talking to him, change five of the town’s decorations into ones for Ostara to get 40 Ostara Tokens. Unfortunately, you can’t finish this quest because of a bug that made Ubisoft take away the ability to customize settlements in Assassin’s Creed Valhalla.

The egg hunt is the last way for players to get 140 more Ostara Tokens. There are 15 baskets of eggs hidden around Ravensthorpe, and players will need to find all of them to get the reward.

They have always been in the same place, so players who can’t wait can look up where they are. On the other hand, six egg whites have clues hidden behind a problem that players can solve to get an advantage, and Odin’s Sight can be used to find all of them.