In 2017, all fans of Assassin’s Creed They welcomed Origins with joy. The game, which ended a two-year hiatus with no new games in the series, was pleased by bringing new mechanics, telling an interesting story about the origin of the Assassin Order, and being grandiose, full of activities and missions.

A year has passed and again a Assassin’s Creed was announced. But, unlike in other years, when we’ve seen games from the series being released without any big news, we have the impression that the Ubisoft worked in Odyssey in parallel to Origins. After all, a lot of its predecessor is here, but better. And without the face of rushed work.

Three Assassin’s Creed games are made

The game sought to bring more of the Bayek adventure concept. Then we have the premise of an epic adventure, in an ancient Greece that lives in turbulent times. And, with its two protagonists, a lot to do, and within a world that has never been so alive, Assassin’s Creed Odyssey wants to keep the name of the franchise among the greats of the video game.

A living and pulsating Greece 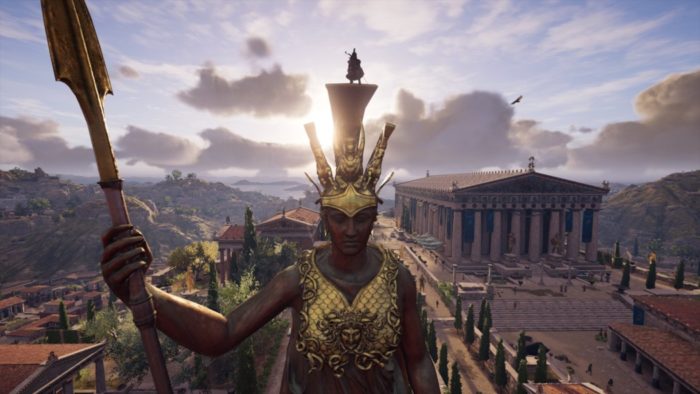 The history of Odyssey happens 400 years before Origins, in the middle of the war between Athens and Sparta. choosing between Kassandra and Alexios, you will be able to explore all of Greece, in an extremely well planned world. Greece is not just a sea of ​​clear water, and constructions built on its well-known columns.

You will explore from the grandiose Athens, with its giant statue dedicated to Athena. As well as getting to know smaller, poorer places or small villages. Not to mention the number of temples, caves, lakes and many other places to visit. One of the game’s “missions”, at least for those who want to know every inch of the world, is to ride, walk and sail to every corner of the map.

And, in addition to the map, with its varied locations, we also have the sea, which is more challenging, and with a very interesting ship system, which I’ll talk more about later. Returning to the game world, almost everything there seems to be alive, as practically every place has either a mission waiting to be completed, or a place to explore.

You don’t feel isolated in a big world, but empty. On the contrary, the game invites you not to settle for just the main Odyssey, and will always have an icon available calling you to be visited. In fact, the variety of missions is something to be praised here too. Let’s talk about them now!

You won’t have peace in Greece 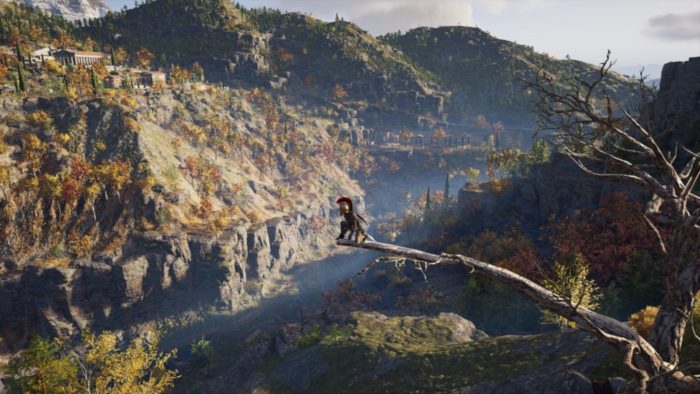 be with Kassandra, or with Alexios, you won’t have much time to enjoy the Greek landscapes. The Odyssey alone has many missions and things to do. However, this time, the Ubisoft did not offer the quests in the pattern “main quest” and “minor quest”. In Odyssey, the missions are spread all over the place, and practically all of them will help, in some way, in your progress.

The main quests, treated here as Odyssey, are the ones that will take you deeper into the main storyline. Nonetheless, Alexios and Kassandra can, as well as Bayek, help people in general with their varied problems. In addition, they will have to deal with local personalities and leaders, with their respective good rewards.

For these and others that we love Kassandra! #AssassinsCreedOdyssey pic.twitter.com/d6OPuzBxaj

The difference here is that the missions weren’t built around just “do this” or “go to that place”. Yes, this is still the way to accomplish them, but with the new dialog system, you can complete the task in a variety of ways. Or not complete them. You can resolve a conflict, for example, using conversation, or force. Or it may not save a person if it doesn’t arrive in time for their rescue.

The Messenger is available for free from the Epic Games Store

Also remembering that Assassin’s Creed Odyssey it’s a war game. Soon, you will be able to fight in several epic battles. As you’re not on anyone’s side, you can take whatever side you want, in search of better rewards. The battles are fluid and give that 300 movie vibe, promised since its presentation.

And finally, the ships. There was a lot of expectation around the ships, since Origins gave a taste of what was to come. In Assassin’s Creed Odyssey, in addition to the ship being important for navigation, as happened in AC IV, your system was also very interesting. Lacking the most advanced technology on the pirate ships, good ideas made up for the lack of cannons. 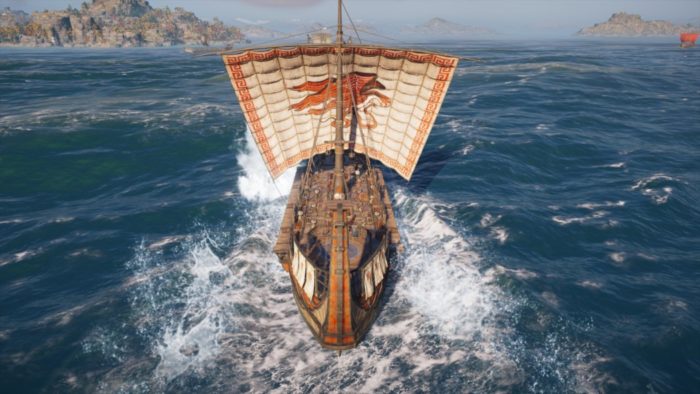 You basically attack your enemies with flaming arrows, and, through a resistance bar, your rowers give the ship more speed to attack your rivals. With the necessary evolutions, the battles became very dynamic and fun.

There are camps, cities, caves, legendary animals, statues, people and tasks that promise to keep you busy for a long time. Especially considering the fact that there are now two characters, and each with their own story. 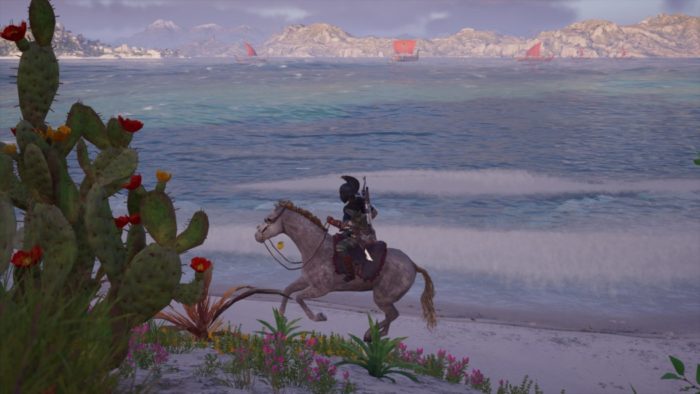 When it was announced that Assassin’s Creed Odyssey would be an RPG, Ubisoft took it all seriously. We can separate three elements that show this evolution well, if we compare with Origins: evolution, dialogue and exploration.

Overcooked is available for free at Epic Games Store

Exploration, already mentioned, offers several situations in the game, in which you can carry out missions and visit locations, with all activities offering you experience points. Evolution is something unique. Virtually everything can be evolved in the game. Weapons, protection items, skills (now you can evolve learned skills), and your ship.

And, as for the dialogue, the game gained a lot with this new feature. The system will still need more work for later games, however, what is available is already very interesting. Exploration-based gameplay takes away the destination points and puts the search for information in place. For you to make the deduction on the map and go to the appropriate place. 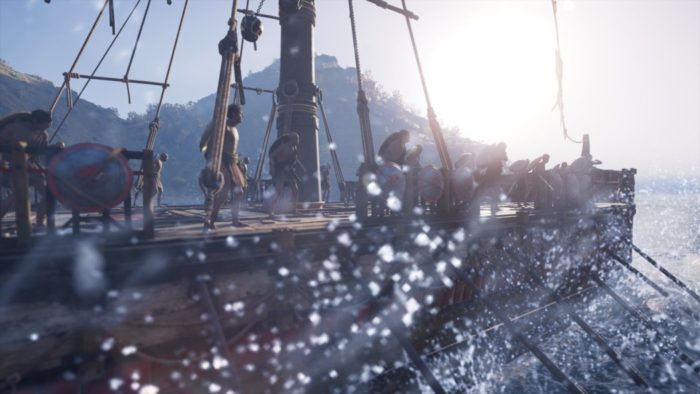 In addition to seeking information, you will also be able to respond to everyone in a variety of ways. You can be polite, rude, kind, or violent. Or, you can play the conqueror or the conqueror, and go out flirting with the characters in the game, if the opportunity arises. This only guarantees the game an air of greater authenticity, with you narrating the dialogues.

Still, these decisions are directly linked to world events. However, unlike what we see in games like heavy rain or Life is Strange, it is not a game based on a “set of answers” ​​that has specific results, in a limited context. Instead, we have a more organic game system, which, little by little, will design a scenario for the player, based on their choices.

But, there is still not that feeling of “master of your destiny”. Because many of the answers, still serve more to give content to the dialogue, instead of dictating drastic changes in the plot. However, this cannot be a reason for criticism, but a point to be commented on, in the expectation that this feature, one of the good news here, will be better presented in the future.

“No killers” but with a lot to add to the series 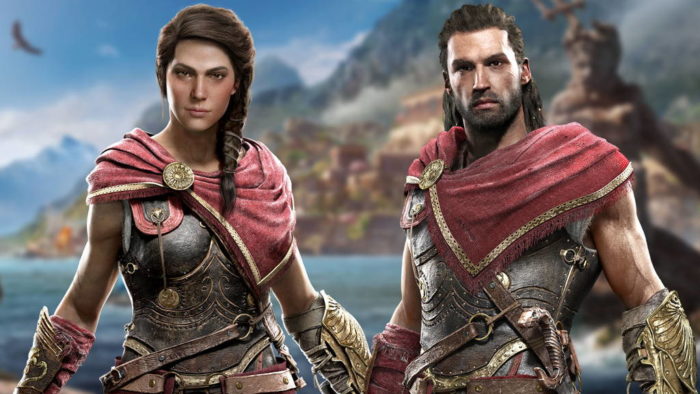 Origins, which has its history 400 years after Assassin’s Creed Odyssey, shows the origin of the Order of Assassins. But whoever plays the series knows very well that the game’s story goes far beyond the organizations and their characters.

Your world is rich with details and, through the ages, many details can be presented. Even without you hearing during the game about the eternal struggle between Assassins and Templars, many issues of your universe are being presented and discussed.

The cult of the game, for example, refers to what would be one of the embryos of what the current Templars would be. But the plot doesn’t stop there. Anyone who has played the game for years will enjoy many references and elements of the franchise as a whole, and better understand the already gigantic and complex universe of Assassin’s Creed.

Assassin’s Creed: Origins is the best-selling game in the UK. Wolfenstein 2 off the podium 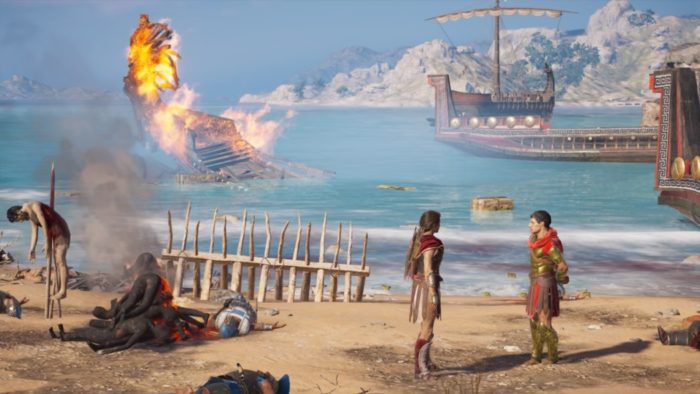 This without telling the stories of Kassandra and Alexios. It’s been a while since there were characters so charismatic, and such an interesting plot in the series. Bayek I’m sorry, but despite having enjoyed knowing your story, the Greek odyssey manages to be much better. To the point of placing both characters among the best in the series.

Returning to the global universe, Assassin’s Creed Odyssey it proves that it is possible to “go back further” to the past, and talk about your world, without necessarily focusing on the struggle of Assassins and Templars. Bayek had already shown some of this, and Odyssey it only proves that it is possible. In fact, the Ubisoft, if you find it relevant, you can go back even further in time. We have Babylon, Aztecs, Mayans, and several other civilizations that can fit this theme.

We played Assassin’s Creed: Identity, the Assassin’s Adventure for iOS and Android

You don’t want to leave Greece

One of the best games in the franchise, Assassin’s Creed Odyssey offers a rich world, charismatic characters, evolution of everything that went right in Origins, plus a local plot, involving Greece and its protagonists, interesting and captivating.

Added to this, we have agile gameplay, almost fully scalable locations, fun battles and the return of ships. Its dialogue system, although it has room for improvement, is very interesting. And its clue-based gameplay, while still pretty simple, is already a significant change.

In the end, we can say that Assassin’s Creed Odyssey it is in fact an “Origins 2”. But I say this on the positive side of the thing. The impression we have here is not that Odyssey it was done in a hurry, just taking advantage of the resources of its predecessor. Instead, we have the good impression that the Ubisoft planned both games. Giving the first one to offer new things to the players, and the second one, the significant evolution (and with more work time) to the game.

BestyGames Analysis: Journey to the Savage Planet is the first good surprise of 2020

The game adds up in an important and interesting way in the franchise, and manages to please “Greeks and Trojans”. Thus, fans of the series, as well as those who have never really played an Assassin’s Creed in their lives will be able to enjoy themselves, and find here one of the great games of 2018.

Assassin’s Creed Odyssey is already available, for Playstation 4, Xbox one and SQUARE.

You get a switch version of The Witcher 3: Wild Hunt