BestyGames Review – Assassin’s Creed: Rogue Remastered and the new opportunity to be a Templar

Will Call of Duty: Modern Warfare Remastered be released on its own?

Dragon Quest Builders is a recent franchise, but it showed that an adventure game combines with an RPG theme and style construction mechanics. Minecraft. Developed by Square Enix together with the omega force (a subdivision of the company KOEI Tecmo) who is responsible for the game series Dynasty Warriors, the series reaches its second edition, proving that it is capable of going beyond the basics.

As in the first game, the player takes control of a creator (Builder), who has the ability to create things simply by “scratching” a creation in his notebook — known as a builderpedia or the creator’s encyclopedia.

We started the game as prisoners, in a ship. Let me explain: after the events of the first game, every kind of creation or person who calls themselves creator/builder is considered a heretic, as a new order of clerics has decided that whoever creates things is an outlaw and needs to be eliminated. Known as the children of hagon, these clerics they are looking for all creators to be taken into their custody. 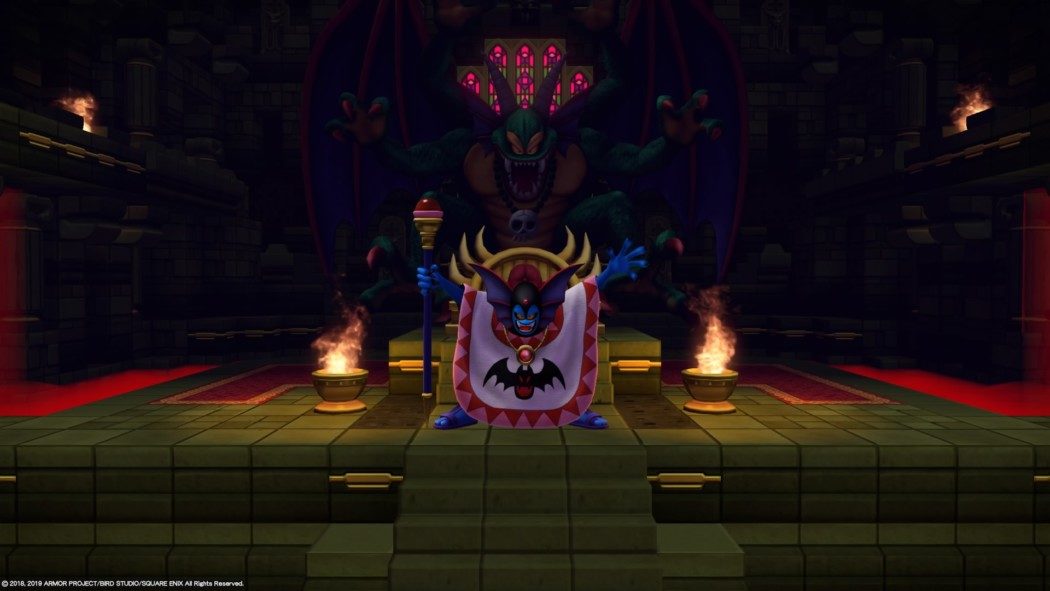 After the opening scene we are summoned by one of the ship’s guards to start understanding how the game will work going forward — a mini-tutorial. Learning done, the player ends up on a desert island called “Isle of Awakening”.

There, we will find 2 characters: Malroth , a guy who doesn’t remember his past; and Lulu, who was on the same ship as you and will help you on your journey. They will be great allies in our adventure through the world of Dragon Quest Builders 2. 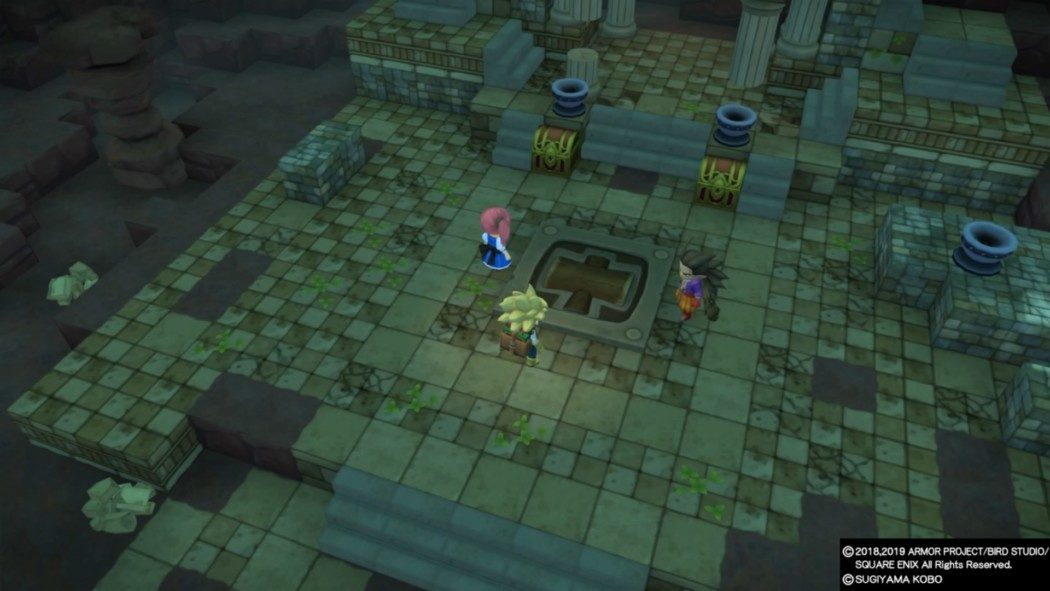 After this meeting, we’ll establish a makeshift place to sleep and we’ll learn that there is one more presence on this island, which we obviously need to find out.

Just like in the first game, in Dragon Quest Builders 2 we need to meet the demands of the NPCs we meet in order to progress. There was a small refinement in the gameplay: now we have an experience bar indicating how much more we need to level up, and many game mechanics are unlocked as the character evolves. 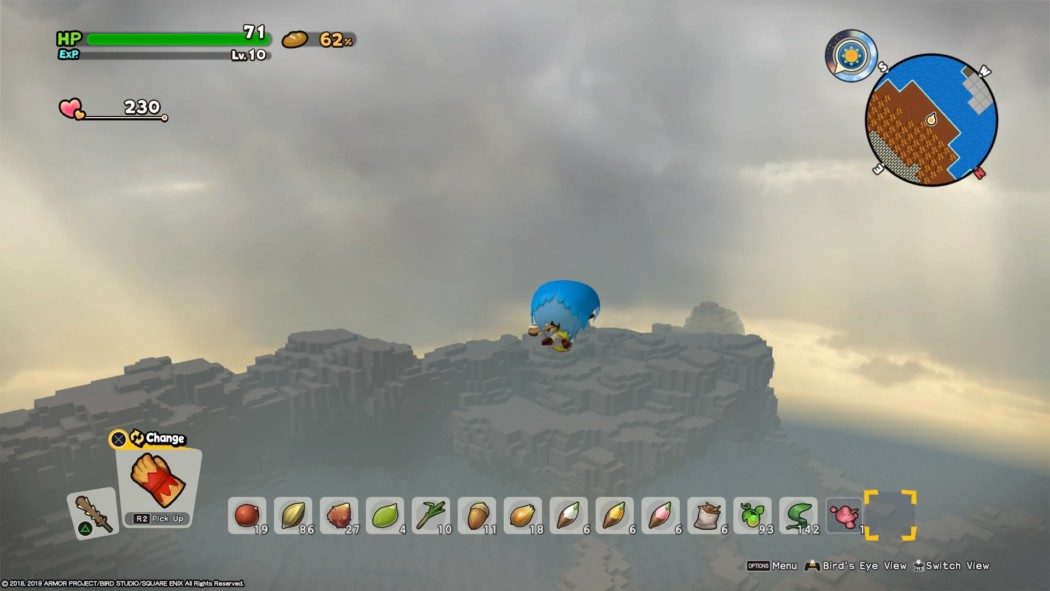 Another addition was first-person view, which can be enabled at any time. It helps a lot when we are in a closed and/or tight place. Furthermore, now we can swim — there’s even underwater combat! — and also glide, wearing a kind of cape.

With the refinement of gameplay itself, came combat: now we attack with a specific button which is suitable for the type of weapon we use, and we use the builder tools through another button, which makes life much easier for us and avoids confusion.

Other types of weapons and tools will be released as you progress through the game, as well as some abilities that will help in combat, such as Spinning Attack that returns from the first game. We can also create weapons for Malroth, which will be of great help in the fights that lie ahead. 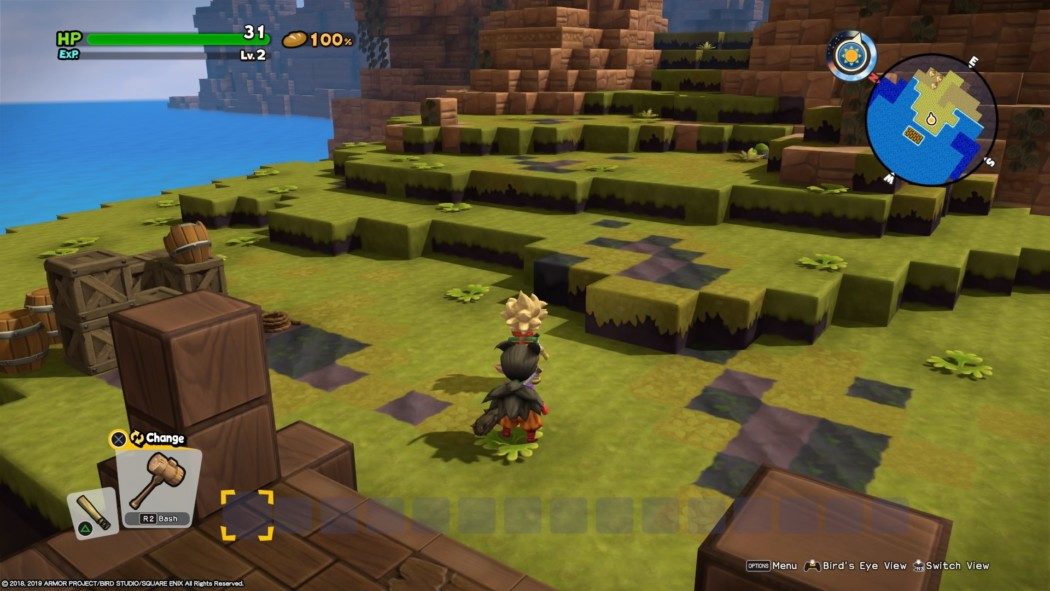 Overall, combat has become much more important in Dragon Quest Builders 2, so we always have to take a break from building and go after monsters to farm some experience. Because of that, it’s good to see that the gameplay evolved to make this area of ​​the game more interesting.

Enter the Dragon – A new event in World of Tanks Blitz

Teaching people the importance of creation

Just like in the first game, here we have several missions to complete. when we get to Isle of Awakening, the main quest is to rebuild a kingdom there… but we can’t do it alone: to build a kingdom, we need help. Once we acquire the ability to create, we can help the other realms rise and become self-reliant again, and that’s where our help will come from. 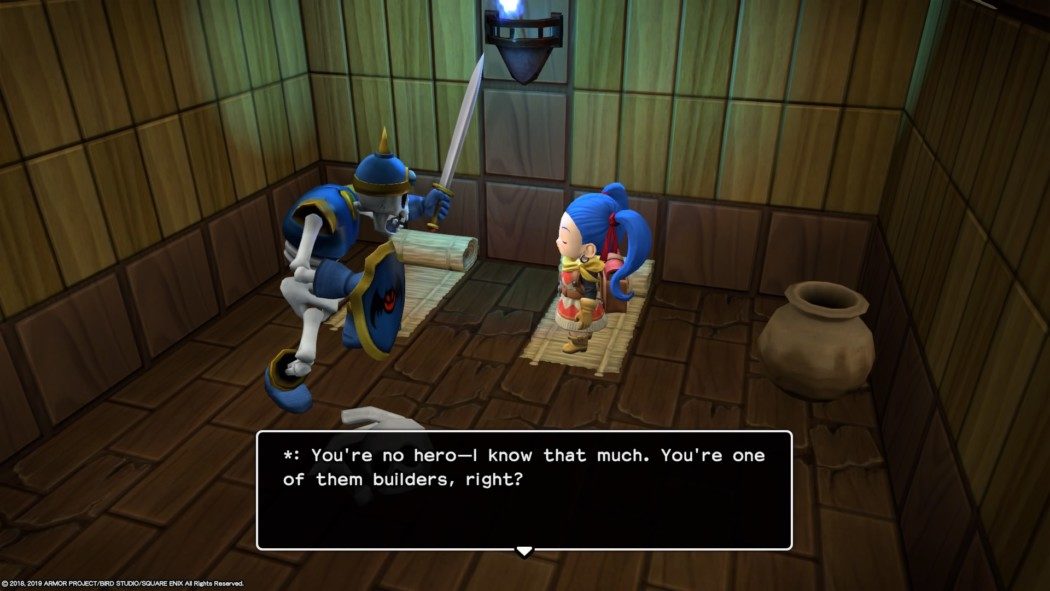 Explaining: to increase the level of the Base (in this case, the city) we need to do the missions that appear. Most of them will emerge as we explore the locations, so exploration is key to advancing the campaign itself.

Review: Song of the Deep (PS4)

With each completed mission, the villagers are getting more inspired to keep working, which earns us affinity points. These dots are small hearts that can be collected to level up the village and advance further in the story. It is these villagers, duly helped and happy, who will help us with our constructions.

Something that I found interesting in the game is that when we are at the maximum level of the base (city) and we need to rebuild walls due to enemy attacks, the villagers themselves do the work, saving the player a little time and manpower. 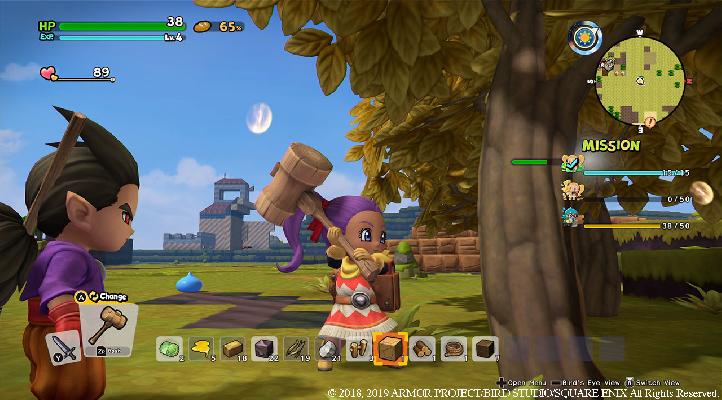 When your domains by Isle of Awakening are already prosperous, you can go out to explore other regions. the world of Dragon Quest Builders 2 it doesn’t look that big, but it’s not too small either. There are many places that seem to have been inspired by the series. Dragon quest, and to unlock new places and exploitable areas, we need to accumulate inspiration points, meaning the gameplay loop “ties” the fulfillment of missions to exploration in a simple and efficient way.

One of the new features of the game now is the mode online multiplayer. After certain events, we are presented with a portal of light that appears in the Isle of Awakening. 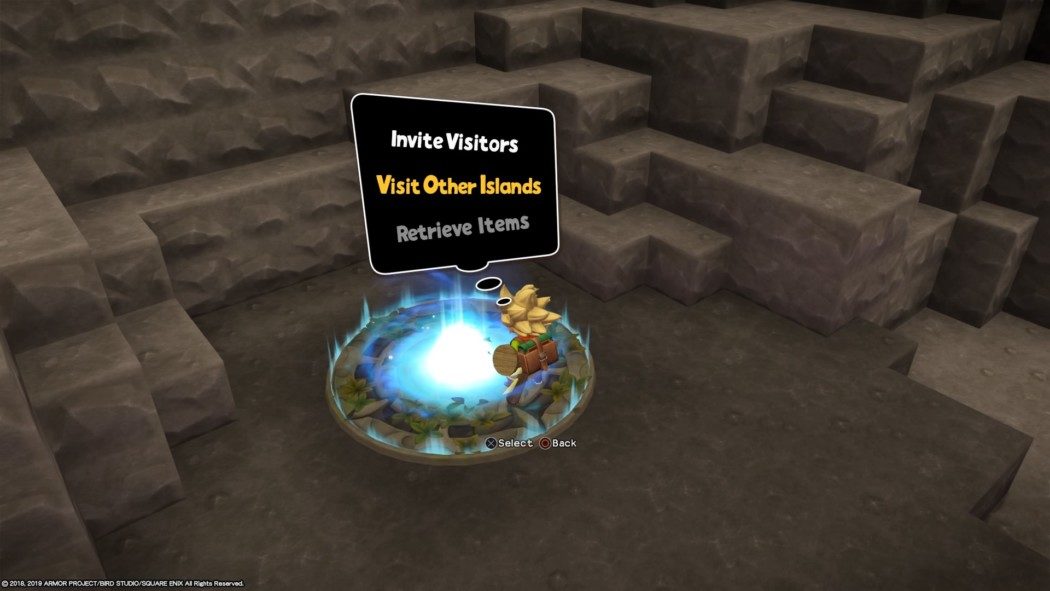 In this portal you need to create a player ID, so that the system will add you and your island to the network, opening the possibility for other players to come to your island to play together.

Unfortunately I couldn’t find anyone yet, but it’s another interesting addition to the game. Considering that the game has just been launched in the West – and the portal only appears after a little bit of gaming –, soon new islands and visitors should start to appear. 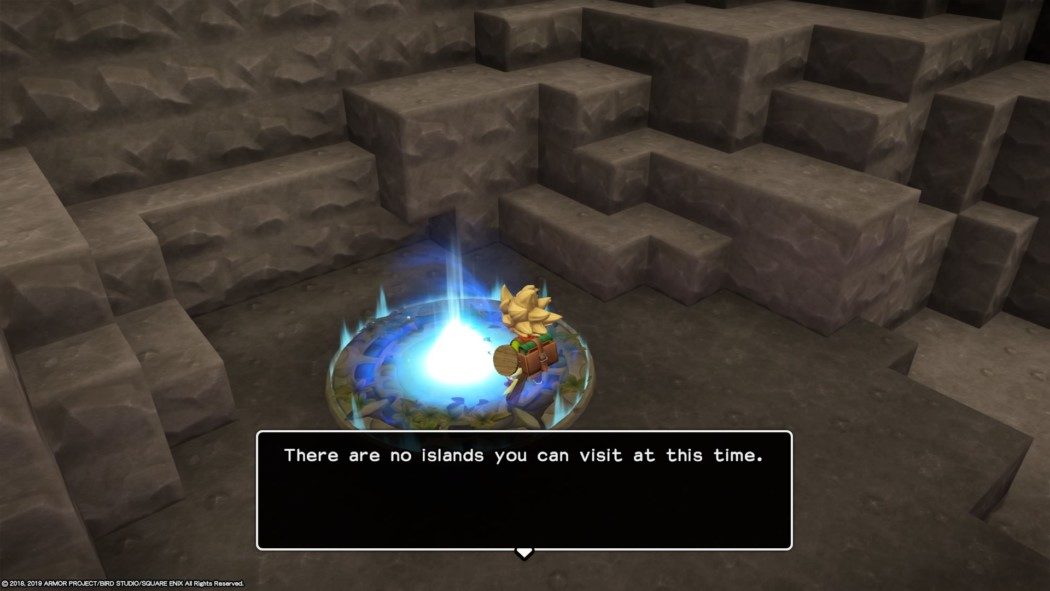 We also have a Bulletin Board on the island — picture below… 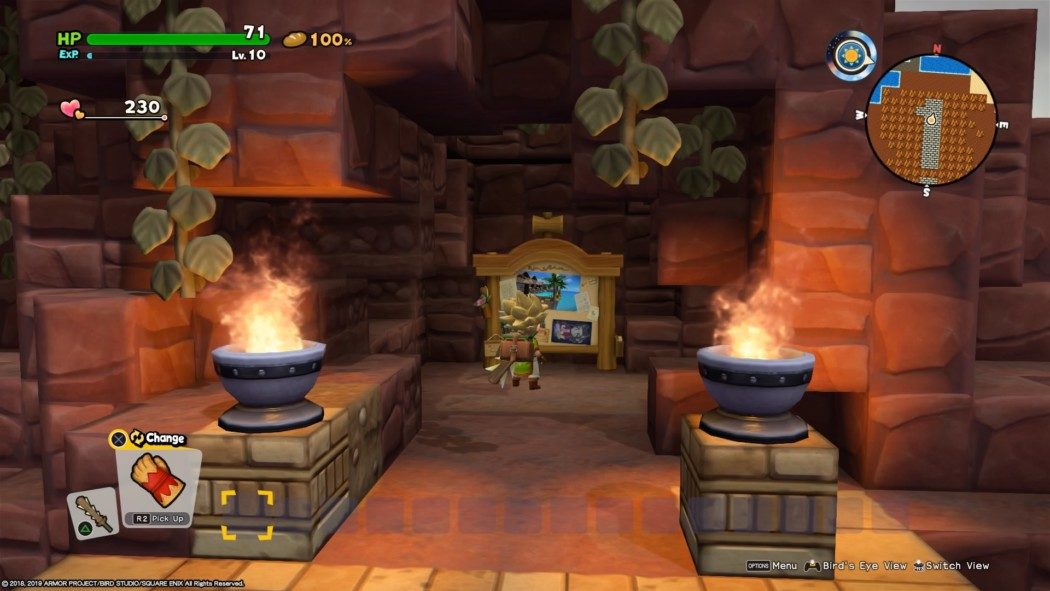 Where can we see community news in-game: there there are contests with the best photos of the day and the best buildings made by the community — with the possibility of visiting these islands to see everything up close (remembering that during these visits, we cannot change the surroundings or interfere in the creations of other players, that is, the intention is just to explore and take pictures).

Overall, the soundtrack and graphics remain almost unchanged compared to the first game, in other words, a cute and colorful 3D, with that touch of style Akira Toriyama which is characteristic of the franchise Dragon quest.

****** and horse racing featured in ‘Dragon Quest XI: In Search of Departed Time’ 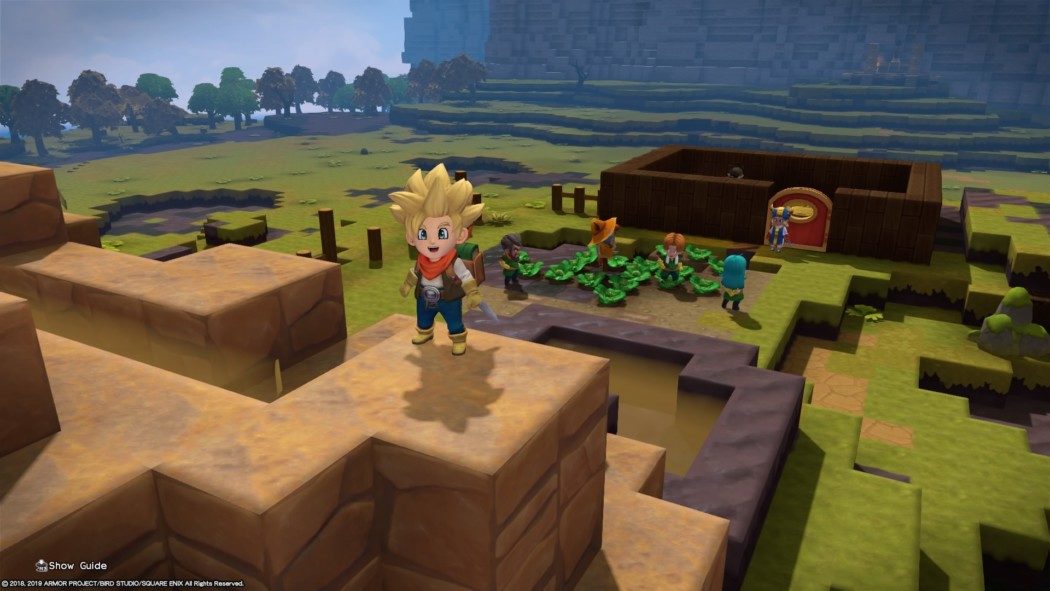 The copy we received for this review was from PS4, but I tested the game demo on Nintendo Switch, and there are practically no very glaring differences between the two versions. Of course the console Sony runs at a higher resolution, but overall the game doesn’t Switch owes nothing to the version of PS4 in terms of performance, and the mobile factor “play anywhere” without a doubt is a very positive differential for the Nintendo platform.

The soundtrack dynamically changes when we leave a city for the open map without any loading intrusions or anything like that, which helps to keep the player immersed. By the way, the + track was composed by the original composer of the series Dragon quest, Koichi Sugiyama, and brings the same level of quality that we’re used to seeing in the saga’s JRPG. 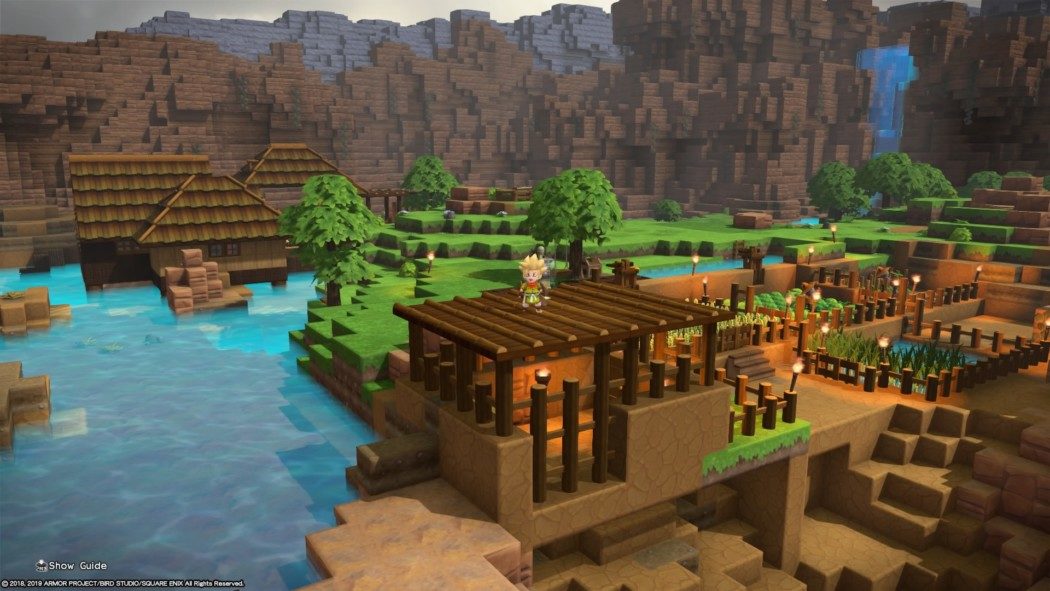 Unfortunately the game (again) did not receive localization for our language, so if you don’t want to be bogged down in history — or even menus and tutorials — it’s important that you manage to get by in English.

Dragon Quest Builders 2 is that famous case of how a proven recipe can be even tastier with new ingredients: bringing good news in terms of gameplay, online multiplayer (for up to 4 players) im overall refinement of experience, the game evolves the formula and expands the original proposal, making it bigger and better. 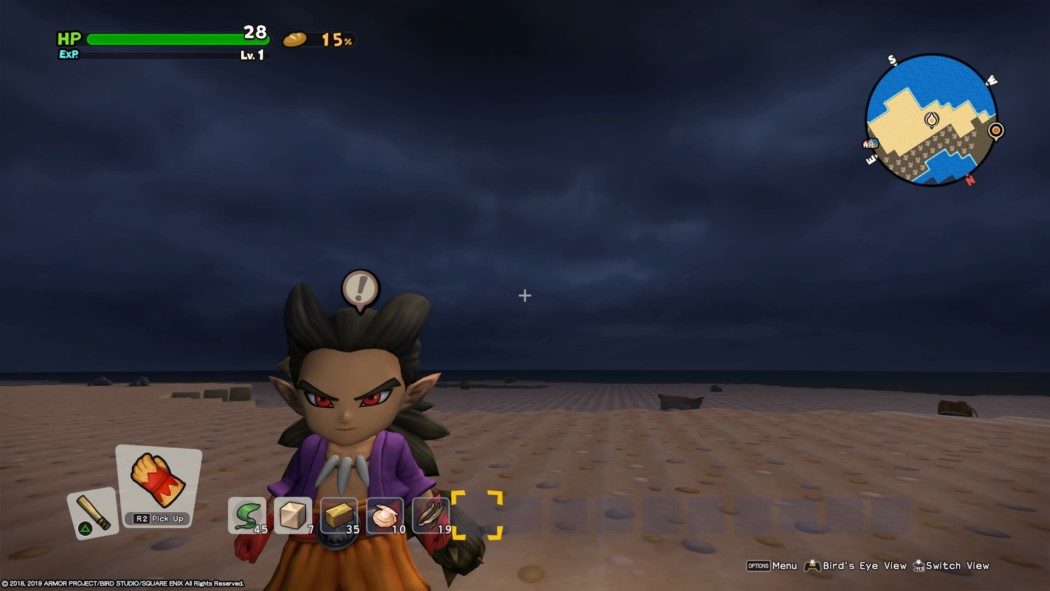 In other words: who liked the first Dragon Quest Builders you will definitely like this one too, which has a very similar core, but brings new elements that enhance the experience, improving and improving the concepts presented in the 2016 game. If you enjoyed this curious Japanese mix of JRPG with a construction sandbox, this is a good choice!

* Who signs this analysis is the guest Stephano Luiz.

The first chapter of Minecraft: Story Mode is free

Gothic: Complete Collection and Arcania Gold Edition are back on sale

There will be more news about the Nintendo Switch in January

Nintendo Switch, what is the release date?

Nintendo Switch, how to connect and use wireless headphones with the console