What do you know about Call of Duty: Modern Warfare Remastered?

You can get Saints Row: The Third Remastered for free for a week

I believe I can fly! If you know this song, you definitely do. Space Jam. The film, which celebrated 22 years of history on the 15th of November, is one of the most beloved animations of the 90s. Looney Tunes like Michael Jordan, at the time, already consecrated as the best basketball player of all time, it worked very well.

So much so that, even today, the film is remembered, and a sequel was always desired. Until, finally, in September of this year, the Warner Bros. confirmed Space Jam 2. With LeBron James starring and Ryan Coogler, in black Panther, in production, the film, which has no release date, has high expectations.

However, did you know that at the time of the movie’s release, a game was released? With versions for Playstation, saturn and computers with MS-DOS, the game, despite being simple, had all the atmosphere of the “game of the century”, and, with arcade action, it managed to have a lot of fun.

Including, a tip: read this article listening to the unforgettable soundtrack of Space Jam. Remembering that we are in the Spotify, with a really cool playlist of games, cinema and entertainment in general. Follow us there!

the game of the century 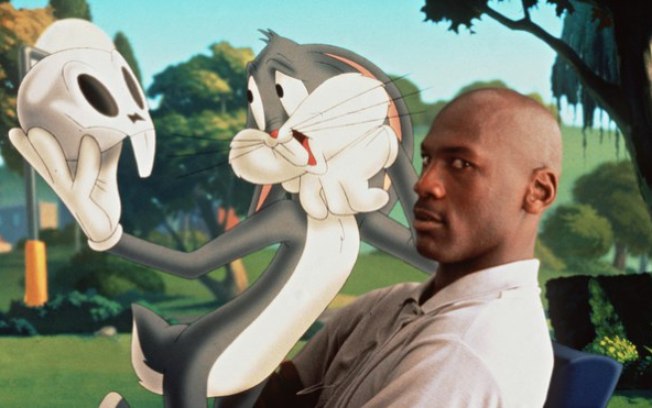 the friendship of Michael Jordan like Long leg it’s a little older than the intergalactic game against the Monstars. In 1992, Jordan, already champion by Chicago Bulls, was also a poster boy for Nike. So, in one of his many commercials, he comes up with the Long leg, playing basketball. And, curiously, in another commercial, from 1993, the space was already the setting for the video, but with the context of marvin the martian.

And this one, from 1993, already has the space as its theme:

And, interestingly, the film has a very special particular issue for Michael Jordan. In 1994, the basketball star was unmotivated with the sport, and decided to pursue a career in baseball, giving up contracts and million-dollar salaries. However, the initiative didn’t work out very well, with Jordan not getting a spot in teams from MLB, and with weak passage in the Birmingham Barons, a US minor league team. The film even shows this moment in the player’s career. 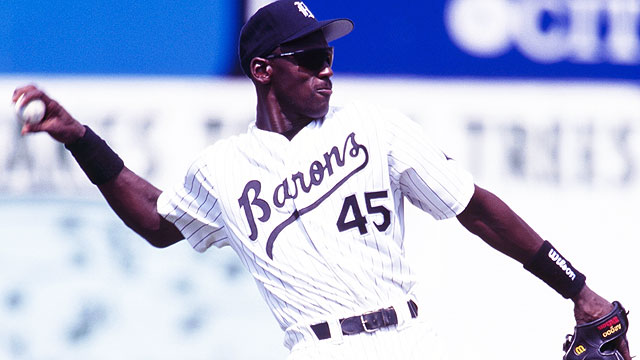 Jordan tried to make a name for himself in baseball, but basketball is his place.

Thus, with the return to the courts, the player, who always knew how to deal with his image (his rights, as well as those of Ayrton Senna, were very complex, as both athletes were very demanding with their respective images), found in Space Jam the perfect occasion to celebrate the sport that consecrated him, as well as spreading the word more about the sport around the world.

The film is very simple, made for family entertainment. Alien beings challenge Earth to a game worth human slavery or freedom, and cheat by stealing talents from Earth stars. NBA. So, fearing the threat, the Looney Tunes ask for help to Jordan, which joins the Tune Squad in a game full of ACME products and fun situations. The film was not very well received by critics, but it took $230 million at the box office and made a legacy.

It is worth remembering that, in Brazil, without much access to matches, the NBA leveraged the interest and audience among children. And it’s quite common to hear basketball fans or players, who were kids in 1996, say that, in one way or another, they were influenced by the movie. 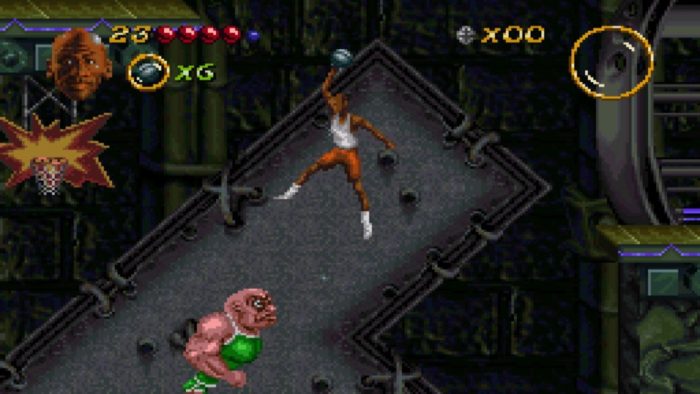 Michael Jordan has already “saved the world” once. On Super Nintendo.

As mentioned, Michael Jordan he was very picky about his image. So much so that, in the legendary NBA Jam, there are very rare versions with the player, as he has not officially starred in the game. Learn more about this story here. First, Jordan made his game debut in 1988, with Jordan vs. bird, game of Electronic Arts, being one of the embryos of what would be the EA Sports.

In 1994, it was released Michael Jordan: Chaos in the Windy City, platform game with basketball touches, for the Super Nintendo. There was the game Space Jam, at the end of 1996, the subject of this article. And finally, he appeared as a retired player in NBA 2000. MJ would still appear as a player of the Washington Wizards in NBA 2K2 and NBA Live 2002.

More recently, Jordan starred in the special edition of NBA 2K11. In the game, classic games from NBA can be played. Thus, it is possible to play memorable games of Michael Jordan fur Chicago Bulls, in addition to experiencing the athlete’s career, which ages over the years. 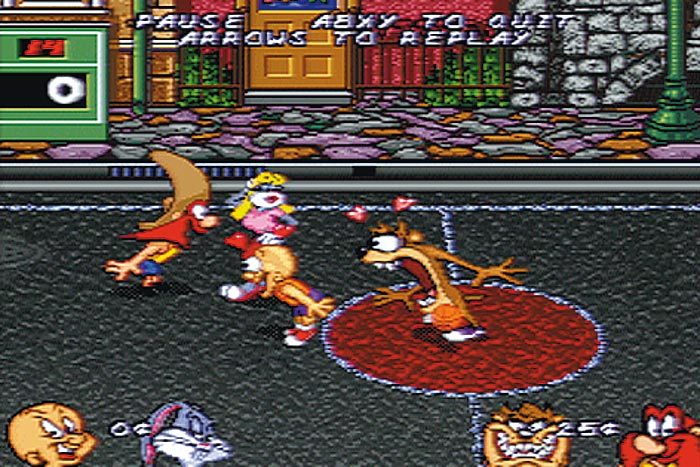 All the great talent in basketball started out playing in the street.

Before Space Jam, you Looney Tunes already enjoyed games with the orange ball. THE Sculptured Software, who already worked with sports games, in addition to bringing the conversion of doom to Super Nintendo, presented Looney Tunes B-Ball in February 1995, months before it was acquired by Acclaim, which already had NBA Jam making success around the world.

The game is even inspired by the classic basketball game. It was also played in 2×2, and allowed the game between four people through Multitap. But because it is a game of Long leg and your friends, it was possible to pick up power-ups on the court. Probably developed by ACME, which served either to give more strength to players, or to hinder opponents.

The game received a friendly reception from the press, and was a hit with gamers, especially children. Thus, the responsible studio would be hired to make another basketball game, with the same characters.

Tune Squad or Monstars: you choose

the game of NBA Jam It’s quite simple. Nobody wanted to invent fashion for the game and they focused only on what interested them: the game of basketball. But it is only possible to play one game, and choose between the team of Looney Tunes, or that of the alien villains. Just to give the game a little extra, simple minigames take place at the beginning of the game. Or between rooms, if the player wants to check it out.

Deciding on your team, you choose three players and go to the game. The time and difficulty is pre-set by the player. And already on court, the game, which has the partnership between Sculptured Software and Acclaim shows an option of NBA Jam very fun. The game has similar controls but is slightly simpler to play, clearly focused on kids. It’s much easier, for example, to make three-point baskets, especially with Michael Jordan.

Another novelty here is the animations. if in NBA Jam there was a party of burials and fireballs, in Space Jam the party is even bigger. Since each character has its own animations. as the Long leg, which buries with the ears, or the taz that makes its famous twirls. And even swallows the ball that falls from the basket.

May premieres of the games. No hits yet, but there are some nice suggestions 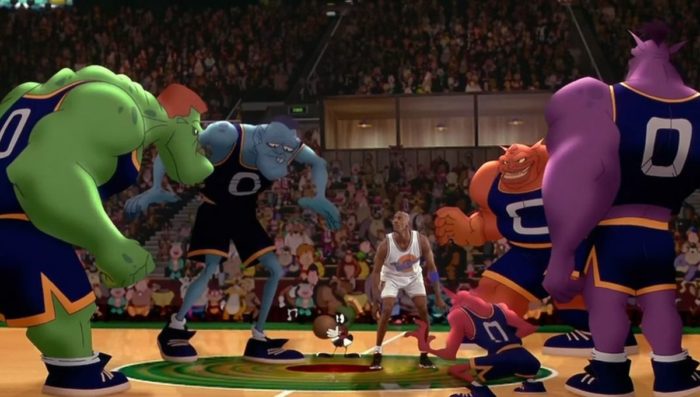 It’s always good to review the “Game of the Century”, whether in the movie or in video games

just like in NBA Jam, there is a turbo button to run longer for a limited time, and there are no faults. The only rule here is Goal Tending. Which is the obvious blocking of a ball that is clearly heading towards the basket. And after the match, just start all over again. Because there is no final, there are no other teams or anything else. It’s just the game of the century, again, again, and again.

The game, despite being simplified, had two problems. The first was the loading of everything. Which, despite being common in games from the 90s on CD, is not justified by offering just one setting for the game. And the sound part, which doesn’t explore the cool music of the game, and has a generic narration. Other than that, despite having an outdated format, it still manages to have fun.

There will also be Euroleague teams in the NBA 2K14

Only the next generation of NBA Live 14 is coming

NBA 2K14 is a gamescomon

The Squad Kickstarter collection is successful

The Street Fighter 30th Anniversary Collection is coming in May

Uncharted: The Nathan Drake Collection is being prepared

Bulletstorm will debut on Nintendo Switch this summer

Yomawari: The Long Night Collection is coming to Nintendo Switch